Unsure how to manage your licenses across multiple workspaces and want to avoid surprising invoices, this article will answer your questions

Written by Maayan Ayalon
Updated over a week ago

﻿
With Craft.io, you can create multiple workspaces with a click of a button.
Whether you want to create segregation by Squads, Value Streams or Products, creating a dedicated workspace for each is the recommended practice, allowing each team to manage their product lifecycle independently.

With that said, if users require access to multiple workspaces (due to their role and responsibilities), does it mean they will be charged multiple time, per each workspace? 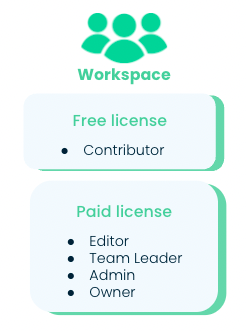 First thing to be mindful of Craft.io account owner, as s/he is the one controlling the billing.

Therefore, all workspaces that are owned by the aforementioned owner will be associated with the account. Hence, paid license users will be counted only once.

In other words, a user could be invited to multiple workspaces and as long as these workspaces are under the same ownership, s/he will be considered as a single paid user.

﻿Similarly with the Feedback Portal, the permission level of Editor and above is counted as a paid license.
As long as the ownership is under the same account owner, Portal users who are already members of the core platform are counted as a single paid user.

﻿If team members do create their own workspace, they will be titled as the owners and the workspace will be considered as separate from the parent paying account.
﻿
To conclude, if you'd need to have several workspaces to manage different value streams or different products, we advise all workspaces are opened by the same user.

You didn't find an answer to what you were looking for in this article? Reach out to Support@craft.io, we are happy to help!